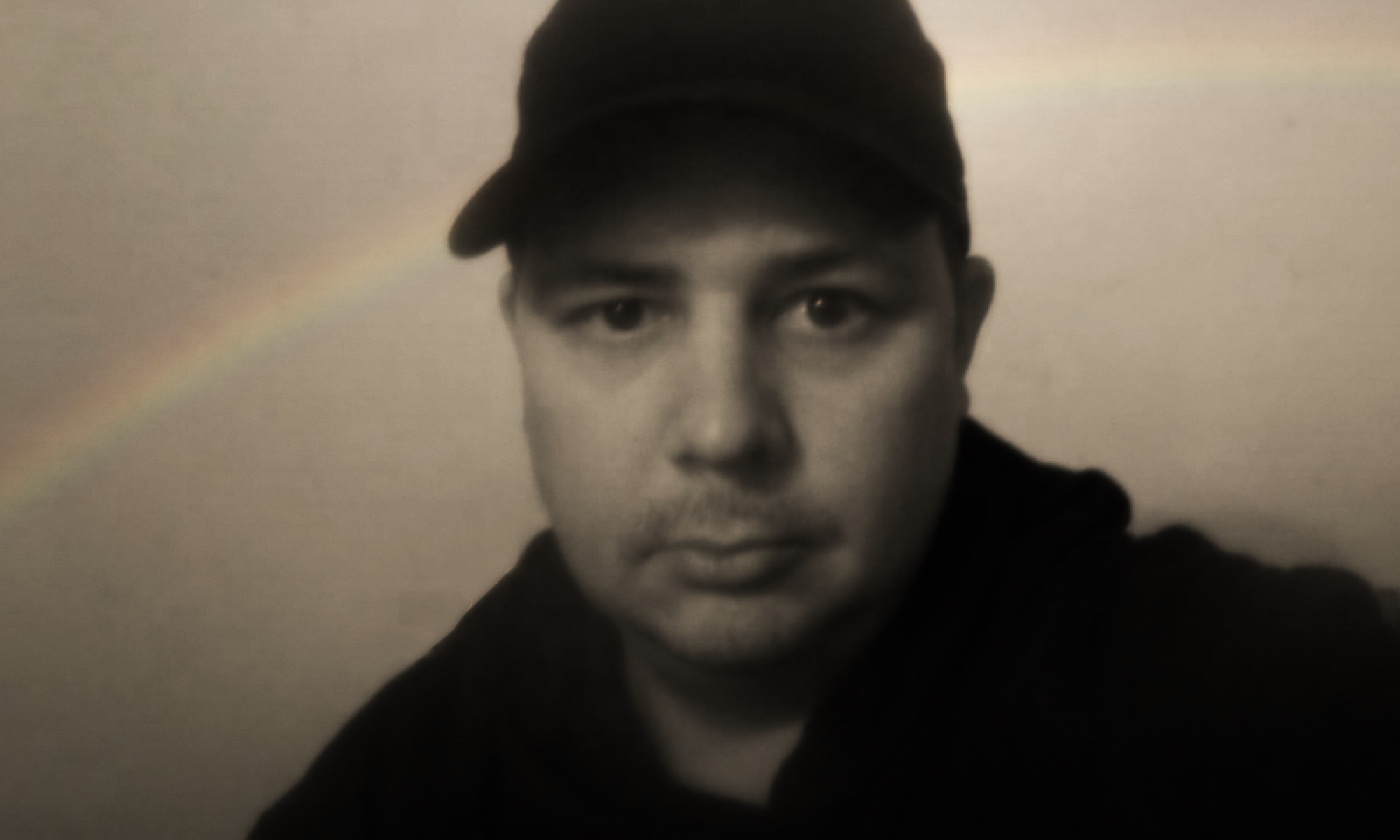 Marlon was my oldest friend; we unofficially met between classes in High school back in 1993. I don’t remember if it was on the way to class, while smoking at the ‘Rock On doors’ or both. But a few days later he was in my computer programming class.

Officially, we met on a bus a few months later. I say officially because before that ride on the Bus, we never really had a conversation that consisted of more than a few words. That changed after Marlon asked me what I was listening to on my Walkman. I started to laugh and told him that I was listening to myself. Marlon looked kind of puzzled and said “Yourself?” I said yes and asked him if he would like to listen to it? He gave me a nod and I put my headphones on his head. To my surprise Marlon listened to the whole song then ask if he could listen to it again, I smiled and said sure. He listen to the whole song again, which also surprised me because most people wouldn’t listen to the whole song once, let alone twice. He took off the headphones and told me that he knew a lot people that played musical instruments and some played in bands but he never met someone who wrote and recorded their own music before. We talked the rest of the ride home and continued to talk for a while even after we exited the bus.

The first time we hung out; I was waiting for the bus when Marlon saw me there. He told me that his friends band was competing in a battle of the bands and asked me if I would be interested in going to the show? I said “sure but I don’t have any money”. Marlon told me that shouldn’t be a problem then told me that he would meet up with me later. To be honest, I thought he was just being polite so I didn’t think anything of it but at about five or maybe six o’clock I heard a knock at the door. To my surprise I opened the door to find Marlon standing there and he asked me if I was ready to go? I quickly reminded him that I didn’t have any money and he said that was fine. I grabbed my stuff, met some of Marlon’s friends and discovered that the battle of the bands was at a club called the ‘El Mocambo’ in Toronto. To my surprise I was familiar with that venue. In fact, I saw a punk band named the ‘Dead Milkmen’ perform there. Anyways, we got a ride there then everyone helped with the gear. We all walked to the door with a great feeling of excitement. I reached for the door and it was locked, we took turns knocking on the door but nothing. I asked the band if we were at the right place? Someone replied with “We were told to use this door”. I thought that maybe we could be at the wrong place or maybe the organizer changed the venue because I didn’t see any other bands there. I can’t remember who was the first person to walk to the main entrance but I do remember walking to the front to check the doors. I saw a notice posted on the door informing the public that the club was shut down by the landlord. We headed back to Brampton and we were dropped off at Marlon’s friends house. That is when the joking around began as I watched his friend beat everyone at pool in his basement including me. I wish I remembered what the name of the band was but Unfortunately I don’t. I do remember that Marlon bought their album at New World Records a few years later though.

What is it that I remember when I think of Marlon? Besides his music, I think everyone who knows him very well would agree with me on this. It was his sense of humour that jumps at me. He was the kind of person who could make everyone laugh so hard with his ridiculous antics and sometimes shocking one liners. His Sean Connery and Elvis Presley impressions still make me laugh today. At least when ever I’m reminded of them, which is a lot because it usually pops in my head when ever I see something dinosaur related. For example; imagine the actor ‘Sean Connery’ was narrating a documentary about Dinosaurs. Think of that iconic voice. Now imagine a large ‘Triceratops’ running into battle. Do you have that image in your head? Now Sean Connery delivers the line “The Triceratops attacks the Clitoris”. I wish I recorded them. He was so out there sometimes.

I remember this other time when I was really sad because of a breakup and he cheered me up by getting a guy to snort linguine. This guy went to town with that linguine. It went right up his nose! We laughed so hard that we fell to the ground. I can’t remember that girls name today but I do remember the feeling I had when I watched that guy snorting that linguine. You know, Marlon paid that guy only five bucks to do it?

I remember shortly after our trip to the ‘El Mocambo’ Marlon began dating a girl named Jill. I remember singing joke songs about her after they broke up to cheer Marlon up. I remember when Marlon told me he met this amazing girl who stole his heart named Josie. I remember when they broke up and I must admit that I was rather shocked and thought evil things about Josie. I remember writing a few songs with Marlon about some of the women we lost. The music helped us deal with those difficult times. Some of those songs really made us feel better but at the same time some made us feel worse. It’s strange how a song almost instantly can stir up so many emotions. It can take you back to a simpler time with just a few notes, it could make you laugh and it can make you cry. That is the power of music.

Marlon died suddenly a year ago today and I feel that the best way to honor Marlon’s memory is to listen to your favorite music and remember.

‘Anthology’ is Marlon’s first posthumous album and contains various pieces which were written and recorded with Marlon Cairenius. These recordings came from various sources and the sound quality may vary from poor to good. After a great deal of thought, It was decided that none of the recording would be remixed or enhanced in any way for this release.

2. Life Goes On Like The Moser Sometimes (Mp3 / Ogg) was written and recorded by Marlon Cairenius in 2007 and later released online in June of the same year on the ‘Forgotten Ideas’ EP. ‘Life Goes On Like The Moser Sometimes’ is the second track on the ‘Forgotten Ideas’ EP and was originally listed online as ‘Marlon_Cairenius_lifegosonlikethemosersometimes.mp3′ and again underneath it as’Marlon_Cairenius_saviour-lifegosonlikethemosersometimes.mp3’. The ‘savior’ in the Mp3 link was a clue to what Marlon was thinking about when he wrote this track. The ‘savior’ is a reference to ‘Jesus’ and ‘Moser’ is the person or persons that informed the Romans which resulted in the death of ‘Jesus’. This recording is an instrumental and has a dark industrial sound with some unusual breaks in the song. The music returns to form while it continues to grow and becomes more intense. Marlon’s silence is telling because when people talk badly about you behind your back, your not there to defend yourself. The break in music makes me think that the song flatlined and when the music returns it makes me think that even when people talk behind your back that it’s not the end of the world.

3. Hold on to your hats (Mp3 / Ogg) is an Avant-garde piece with a psychedelic feel that allows you to drift in to a trance of wonder and self reflection. This wonderful recording is from the Spunjet Records Soundpool release ‘The collective Source’. This song was written and recorded by Marlon in 2011.

4. Factor (Mp3 / Ogg) is a smooth sounding psychedelic track that made me feel that I was listening to only one side of a phone conversation. Now I want to eat some strawberries too. This song was written and recorded in 2010 for the Spunjet Records Soundpool release ‘The collective Source’.

5. listen To The Drip (Mp3 / Ogg) is a fun Musique concrète piece that would make even Pierre Schaeffer smile. This piece was recorded in the early 2010s for Spunjet Records and was later released in 2014 in the ‘Now For Some Marlon’ Soundpool.

6. Echo In A Jar (Mp3 / Ogg) was written and recorded by Marlon and R.h.oZ with the Spunjet Crew in 2015 for the 2015 Edition of the ‘Now For Some Marlon’ Soundpool. This song was inspired from the 2003 song ‘Echo’ by Marlon Cairenius and was produced by R.h.oZ with source material from the 2008 version of ‘Echo’ with various samples from the Spunjet Records Soundpool.

7. Hip Hop Alooie (Mp3 / Ogg) was written and recorded by Marlon Cairenius in 2009 and was also the first Song with source files that Marlon uploaded to spunjet.com. When I listen to ‘Hip Hop Alooie’ I think of the club scene in sci-fi movies like “Star Wars’ but for some reason ‘Gremlins 2’ always comes to mind.

8. A Stripe Sown On Your Dress (Mp3 / Ogg) was taken from the 2008 album ‘Musical Matrimony’ by the ‘J&M Project’ and was originally called ‘Gypson Rhyme in Da Mix’ which was cowritten and produced by R.h.oZ. I renamed it ‘A Stripe Sown On Your Dress’ because I felt it was a better fit for the song. If I had to describe this song I would say it has a Middle Eastern vibe to it.

9. Have An Apple (Mp3 / Ogg) is a 2013 recording that was born out of the Spunjet Records Soundpool. This piece would definitely fit in the Musique concrète genre and is an excellent example of Marlon’s playful spirit.

10. Moments Lost (Mp3 / Ogg) is one of the only surviving recordings from the now canceled 2010 ‘Electroniek Symphoniek’ album and musical experiment that was simple called ‘Volume 4’ at the time. The cancellation was due to time restraints which were made worse after a severe equipment malfunction that resulted in the lost of countless hours of work. Marlon would later release an unofficial version of ‘Volume 4’ using only his and his brothers source material in the early 2010s. ‘Moments Lost’ was written and recorded by Marlon Cairenius and R.h.oz in 2010 and doesn’t appear on the unofficial release but a song which I think was called ‘Hotdog’ was included in the release which was made with the source material and demo recording that Marlon created for this recording. This lost recording was recovered in 2013 and was later released in 2014 in the ‘Electroniek Symphoniek’ Soundpool.

11. Where Is It (Mp3 / Ogg) is a haunting song, especially now that Marlon is gone. ‘Where Is It’ was written and recorded by Marlon Cairenius in 2008 and was featured in an episode of ‘Carbon Monoxide’ in 2009.

12. Martian On The Moon (Mp3 / Ogg) was taken from the ending of a song called ‘Mid Air’ which was written and recorded in 2011 by Marlon Cairenius. ‘Mid Air’ is a wonderful demo that was included in ‘The collective Source’ Soundpool.

13. The Giraffe, The Bird, The Groundhog And The Tree (Mp3 / Ogg) is a 2009 recording by Marlon Cairenius with his brother Johan Cairenius on guitar. I feel this song really captures Marlon’s sense of humour perfectly and makes a fitting end to this album.

Thank you for your time and take care.